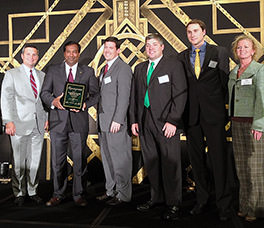 This is the second year in a row that Alliance Consulting Engineers, Inc. has been honored. SC Biz News recognized Alliance Consulting Engineers, Inc. and several other companies from across South Carolina at the Roaring Twenties event on October 24, 2013, at the Columbia Marriott in Columbia, South Carolina. Chris William, series executive producer and moderator of Carolina Business Review, served as the master of ceremonies.

“We are honored by the recognition as one of South Carolina’s fastest growing businesses,” said Deepal S. Eliatamby, P.E., SCCED, President. “We are grateful to our clients for helping us to achieve this recognition. As we complete our tenth year of client service, we look forward to continued development and growth in the Southeast.”

To be eligible, companies must have been headquartered in South Carolina. Winners were divided into two categories by business size. A formula awarding points based on both dollar and percentage increases in revenue from years 2011-2012 was used to level the playing field between smaller and larger companies within the two categories.

Company size was determined by gross revenue of up to $10 million for small companies, and more than $10 million for large companies. Nominated companies were ranked according to revenue growth over a one-year period; both dollar and percentage increases were taken into consideration.

A profile of Alliance Consulting Engineers, Inc. and the other winning companies will be published in the winter issue of SC Biz magazine.