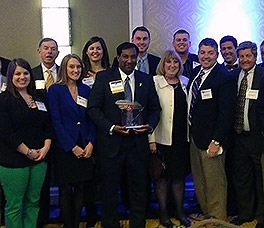 COLUMBIA, SC — November 5, 2013 — Alliance Consulting Engineers, Inc. was named one of the fastest growing companies in South Carolina by Capital Corporation, Integrated Media Publishing and others in the annual 25 Fastest-Growing Companies listing.

All 25 winners were honored at a luncheon on November 5, hosted by the Capital Corporation and co-sponsored by Integrated Media Publishing (publisher of Columbia Business Monthly and Greenville Business Magazine), Scott and Company and Wells Fargo.

“We are grateful to our clients for their ongoing support and for helping us earn the honor of being named one of South Carolina’s fastest growing companies,” said Deepal S. Eliatamby, P.E., SCCED, President. “As we complete our tenth year of client service, we look forward to even more growth in South Carolina and the Southeastern U.S.”

Now in its 13th year, the 25 Fastest-Growing Companies competition recognizes the achievements of top-performing private and publicly-owned companies that have contributed to South Carolina’s economy through exceptional increases in revenues and employment. To be eligible for consideration, companies must have been headquartered in South Carolina and in operation for at least three full fiscal years. Companies must also have reported revenues of at least $3 million in 2012. Rankings were based on the three most recently completed fiscal years at the time of nomination.

Nominees were judged on financial and employee growth over the three-year period from 2010 through 2012.